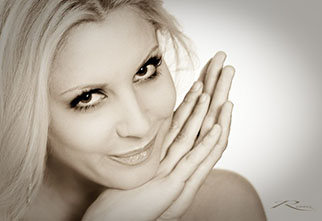 Nina Heidenreich, violin. Since 2008 Nina Heidenreich is Principal of the second violins of the Qatar Philharmonic Orchestra, Doha (Qatar), an orchestra founded and chaired by Lorin Maazel. From 2007 until 2008 Nina was Concertmaster of the Orchestra Metropolitana de Lisboa, Portugal.

Nina born in 1980 in Regensburg, Germany, made her soloist debut at the age of nine in Paris. In 1990 she began to study at the Music Academy Würzburg, Germany, as a highly talented and gifted violinist with Conrad von der Goltz and was chosen for a scholarship from the federal state of Bavaria.

From 1994-2004 she was living in Vienna where she continued to study with Boris Kuschnir at the Vienna Conservatory and later on at the University of Music and Dramatic Arts in Graz, Austria. Shortly after Nina also gained international recognition – in 1997 she won the “Città di Moncalieri” Competition, in 1998 the “Città di Stresa” Competition. She attended lessons with Shlomo Mintz, Viktor Tretjakow and Zakhar Bron.

In 1999 she began additional studies with Julian Rachlin at the Vienna Conservatory.

In March 2000 Nina made her debut at the Vienna Concert House (Wiener Konzerthaus) and at the ORF-RadioKulturhaus with E. Chausson’s “Poème”, which was broadcasted by the Austrian Broadcasting Corporation ORF. Her first CD was a result of this live recording.

In 2003 she studied with Tibor Varga at the Music and Dramatic Arts in Graz, Austria, for one year. Also in 2003 she was amongst the winners of the Fidelio-Wettbewerb Competition. In October 2003 Nina switched to the Vienna University of Music with Gerhard Schulz, where she finished her studies with distinction in October 2005.

Between October 2003 and September 2005 Nina was supported by the Herbert von Karajan Institute and the textiles wholesale trading company JONES.

From November 2005-2007 she worked for the Vienna Symphony Orchestra.