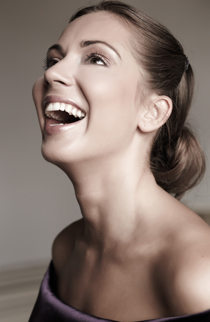 She was an award winner at the European Music Prize for Youth in Hamburg 2001 and at the International Summer Academy Prague-Vienna-Budapest in 2002. At the International Hans Gabor Belvedere Competition in Vienna 2005 she was awarded 1st prize as well as the special prizes of the audience, of the Gulbenkian Foundation and of the Teatro alla Scala in Milan. After her graduation she joined the ensemble of the Slovakian National Theatre in Bratislava.

At the Ravenna Festival 2006 she sang Mozart’s “Vesperae solemnes de confessore” and “Exsultate jubilate” conducted by Riccardo Muti. The same year she went to the Salzburg Mozart Wochen and at the Salzburg Festival and performed “Serpetta” in “La Finta Giardiniera” conducted by Ivor Bolton. She then made her debut at the Teatro alla Scala in “Dido and Aeneas” and has since returned in Carmen under the baton of Daniel Barenboim.

At the Munich State Opera she sang a new production of “Werther” (Sophie) conducted by Ivor Bolton, “Ninetta” in a new production of “La finta semplice” in Vienna as well as ‘Adina’ with the Glyndebourne Touring and Festival Opera and Nanetta in Falstaff and she also has made her Gretel debut (“Hänsel und Gretel”) at Glyndebourne, conducted by Kazushi Ono (Sunday Times wrote: “it’s Adriana Kucerova’s irrepressibly hyperactive Gretel who steals every scene.…”). Adriana sang Anne Trulove in a new production of “The Rake’s Progress” conducted by Nikolaus Harnoncourt at the Theater an der Wien, Sophie in “Werther” at the Munich State Opera, Paris Opera (Kent Nagano Conducting) and Teatro Carlo Felice Genova, Nanetta in Falstaff at the Salzburg Festival with Daniel Barenboim as well as at the BBC Proms.