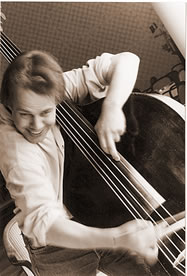 Frank Sanderell, double bass, studied with Klaus Stoll at the Hochschule der Künste in Berlin. His great passion has always been ensemble music. As a student he was already performing as an extra player within the Berlin Philharmonic Orchestra and the Sinfonieorchester des Bayerischen Rundfunks. He was a founding member of the Berliner Kammerorchester and the Ensemble Oriol Berlin.

Forever committed to expanding the range of repertoire, in addition to his classical chamber music and solo activities, he performs many different styles including Rumanian folk or contemporary experimental music and is a member of a Tango quintet.