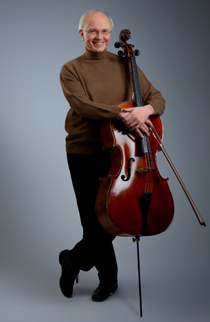 Franz Bartolomey, cello. Born in Vienna, Franz Bartolomey studied at the Academy of Music and Performing Arts in Vienna under Prof. Richard Krotschak and privately under Prof. Emanuel Brabec. He has been awarded numerous prizes at international competitions in Budapest 1963, Moscow 1966 and Vienna 1967.

Franz Bartolomey is principal cellist of the Vienna Philharmonic Orchestra and a member of the VPO (he represents the third generation of his family at the VPO – his grandfather was solo clarinettist and his father was violinist). Franz Bartolomey is internationally active as a soloist and chamber musician. He is a member of the Wiener Solistenensemble, the Wiener Solistentrio, the ensemble DO YOU KNOW and the Wiener Virtuosen.

Several television, radio and CD recordings document Franz Bartolomey’s work (particularly worthy of mention is his recording of Richard Strauss’ “Don Quixote” with Sir André Previn and the Vienna Philharmonic Orchestra under the TELARC label). He also recorded recitals for NAXOS and BMG. Since 2004 he has also been the principal cellist of the Luzern Festival Orchestra under Claudio Abbado.

Franz Bartolomey was honored with the “Großes Silbernes Ehrenzeichen für Verdienste um die Republik Österreich”. In June 2012 the “Ehrenring of the Vienna State Opera House” was confirmed on him.