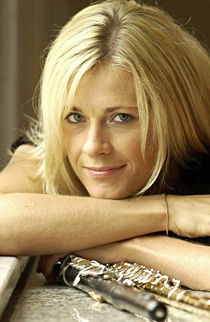 Renate Linortner, flute, started playing the flute at the age of seven. She later graduated with honours from the University of Music and Performing Arts in Vienna. There she had studied with such eminent pedagogues as Wolfgang Schulz, Barbara Gisler and Hansgeorg Schmeiser.

Between 1993 and 1995 Renate Linortner was a member of the Gustav Mahler Youth Orchestra. In 1995 she joined the orchestra of the Volksoper in Vienna. She has also appeared as a substitute with the Vienna State Opera and Vienna Philharmonic Orchestra on their tours throughout Europe, Japan, America and Asia. Renate Linortner is a member of the Ensemble 20th Century and is regularly giving master classes in Austria and abroad. She has recently made solo appearances with Tokyo Ensemble.