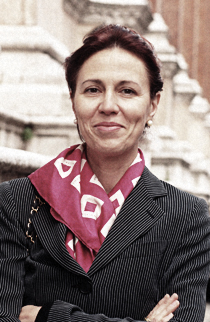 Sara Mingardo, contralto, was born in Venice and has become a highly sought-after performer for both the concert and operatic stage in a wide range of repertoire. She maintains an active schedule of performances on the world’s great stages such as Royal Albert Hall, London, Carnegie Hall, New York and at international festivals including Salzburg, Aix en Provence and Bregenz. She enjoys successful collaborations with such conductors as Claudio Abbado, Riccardo Chailly and John Eliot Gardiner and prestigious orchestras throughout the world.

Her operatic repertoire includes the main works by Gluck, Handel, Vivaldi, Rossini and Verdi and her extensive concert credits include the major works of Mahler, Brahms, Bach, Rossini, Beethoven, Mozart, Handel, Pergolesi and Dvorak, Respighi and Vivaldi. Highlights of her future engagements include Médée at the Théâtre du Châtelet de Paris, Il viaggio a Reims in Montecarlo, Rodelinda in Munich, Giulio Cesare at Sara Mingardo was the recipient of the prestigious Grammy Award for the recording of Les Troyens by Berlioz with Colin Davis and the London Symphony Orchestra, best opera and best classic recording of 2001. Her recent recording of Aci, Galatea e Polifemo was awarded best Baroque Vocal recording at the Gramophone Awards 2003.